Devon Rexes are usually very active, playful, striving for close contact with a person. Their behavior is jokingly described as a cross between a cat, a dog and a monkey (“a monkey in a cat costume”). Able to jump to a considerable height; often try to occupy the minimum enclosing corner, for example, on shelves or between objects. Devon Rexes tend to climb higher and are able to go a long way to climb to the very top of the house.

Most Devon Rex devote their time to any one person with whom they will most often play. Actively play at any age. Cats of this breed have traits that are usually inherent in dogs: they can be taught to perform tricks, bring objects.

A characteristic feature of behavior – Devon Rex loves to climb a person on his shoulders, sit on his neck, be closer to his face

The Devon Rex breed is characterized by curly, soft, short hair, similar to that of Cornish Rex cats. 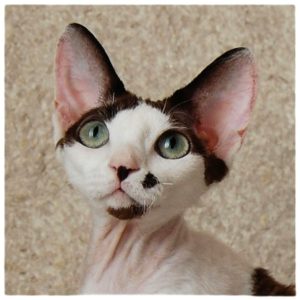 Curls of hair in Devon Rex are caused by a mutation of a different gene than in Cornish Rex, and therefore when mating Devon Rex with other “curly” breeds, kittens without curls of hair are obtained.

Cats of this breed are often called elves or aliens because of their non-standard appearance. Unusually large ears are set low on the edges of a wide flat head, eyes are large, noses are slightly bent upwards.

The body is medium in size, gracefully folded. Unlike other cats, they have very short and strongly curled antennae, which may make them seem to have no antennae at all. Long and strong legs, small and round pads – thanks to this they can make long and high jumps. The Devon Rex wool has a small amount of so-called outer hair.

The first Devon Rexes were found in 1960 in the city of Buckfastley, Devonshire, England, near an abandoned tin mine in a brood of wild kittens. It was originally believed that the breed was related to Cornish Rexes, but this hypothesis was refuted by experimental mating. The first recorded Devon there was a black cat named Kirlie (translated from English-kinky), it was from him that all cats are breeds of their pedigree.

Subsequently, British felinologist Brian Sterling Webb, who worked on the Rex gene, received Kirlie at her disposal for breeding. The first offspring from him was obtained in the Briarry nursery.

Cats of this breed have a unique appearance. Big eyes, a round head, a short muzzle, prominent cheekbones and huge wings like butterflies, low-set ears make them look like elves. The thin, delicate, soft hair with a small short wave is well covered by the exquisite body of Devon Rex. Wool has a peculiar texture, since this mutation is different from all other types of wool and has been cultivated for a long time. Devon Rex has a keen interest in everything around him, he is agile and active.

Head modified wedge. Seen from the front, this wedge is outlined by three tapering convex curves: the outer edge of the ears, cheekbones and pads of the mustache. Cheeky, small, rounded in shape with full cheeks. The width of the Devon Rex head is almost equal to its length. Strong chin with a pinch with a short muzzle. If you look in profile – a nose with a distinct stop; forehead, curving back, goes into a flat skull. The muzzle is short, well developed. Protruding mustache pads. The length of the nose is a maximum of 1/4 of the total length of the head. Pretty graceful neck of medium length and thickness. The mustache and eyebrows are curled, medium length and rather thick.

Set far apart, oval in shape, large, clear, shiny, their outer corners are on par with the outer bases of the ears. A uniform, intense eye color should match the coat color or, with the exception of the Devon Rex Siamese color, be yellow, golden green or green.

A type. Strong, compact. Body. Muscular and heavy (by weight), with a fairly thin skeleton, graceful, with a wide chest, medium length. Males of breed Devon Rex are larger than cats, but without violating the general proportions.

Limbs and paws. The limbs are elegant but strong, the rear is slightly longer than the front. The paws are oval and small. Tail. Long, biting, well covered with short hair, thin and pointed.

Very short, wavy, thin and soft, without visible core hairs. The shortest on the chest, limbs, crown, tail and stomach, but slightly longer on the face, hips, sides and back. Should completely cover the body. Especially thick on the back, legs, face, cheeks and ears, sides, tail; less thick on the neck, crown, chest and abdomen. For many Devon Rexes, the coat on the bottom of the hull is very thin – this should not be considered as baldness. Rare coat in front of the bases of the ears is also not a disadvantage. The effect of waviness is especially noticeable on the back and tail, and is especially pronounced when holding one’s hand through the coat (“elastic” coat), “rex”. All coat colors are allowed, including varieties with white in any quantity. Small white spots are possible even in colors that usually do not allow this. Siamese specimens are called Si-rex.

All colors are allowed.